LOS ANGELES, Jan. 24, 2023 (GLOBE NEWSWIRE) -- DeSo is thrilled to announce a first-of-its-kind Web3 startup competition on the prestigious Princeton campus, designed exclusively for students looking to create and launch the next big thing. The event starts on Feb. 4, and students will have the opportunity to showcase their skills in front of several legendary investors confirmed as speakers and judges.

Princeton students will compete for up to $50,000 in prizes, and potentially receive additional funding and mentorship from the DeSo team and the all-star lineup of prominent judges. Among the confirmed are Vinny Lingham, founder of Civic and Waitroom, Robert Leshner, founder of Compound Finance, and several GPs from well-respected funds, including Sequoia, Pantera, Multicoin, Dragonfly, North Island Ventures, and more.

The competition will be live-streamed, and you can RSVP here.

"For the first time ever, students can launch and fund startups as easily as creating an Instagram account," says founder of DeSo and Princeton alum Nader Al-Naji. "Projects can also launch tokens later on, which can then be traded on DeSo DEX, the world's fastest on-chain order book exchange."

All Princeton students will also be given $50 in free crypto, which can be used to contribute to fellow students' projects.

The DeSo x Princeton startup competition is the first event of its kind, but it won't be the last. Several other Ivy Leagues and major universities have already contacted DeSo to ask if this breakthrough model can be brought to their campus.

If you're interested in becoming a campus partner, feel free to reach out.

This is the latest in a recent string of successes for DeSo. The platform was listed on Coinbase recently, and announced a groundbreaking MetaMask integration. The platform also announced a USDC integration that has attracted many new builders to the ecosystem, including Openfund. Additionally, DeSo is gearing up to unleash a slew of significant updates in Q1 of this year in an effort to decentralize social media the same way Bitcoin is decentralizing finance.

Head to DeSo to keep track of its roadmap and claim your decentralized, censorship-resistant username at deso.com. 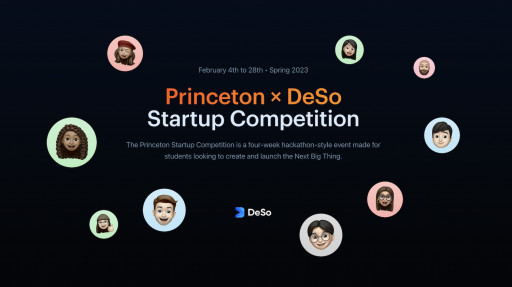 
Princeton students will compete for their shot at $50,000 in prizes.


This content was issued through the press release distribution service at Newswire.com.

For inquiries or corrections to Press Releases, please reach out to GlobeNewswire.
✕
× Close Ad