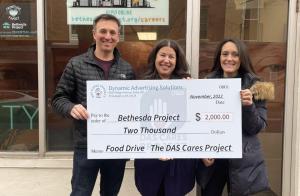 We're making philanthropy one of our core values. Our employees volunteer their time & collect in-kind donations throughout the year to support our neighborhoods, one volunteer opportunity at a time.”
— Andrew Langsam

PHILADELPHIA , PA, USA, January 24, 2023 /EINPresswire.com/ -- Businesses main purpose is to earn a profit, but Dynamic Advertising Solutions (DAS) founder, Andrew Langsam, says they have another equally important purpose—to give back to their local communities.

He believes entrepreneurs have an obligation to provide value to their shareholders, customers, and employees, but they also have an obligation to support the communities that make their businesses possible in the first place. And in doing that, they help inspire others to do the same, which creates a more supportive economy where more people win.

“At DAS we're making philanthropy one of our core values by promoting caring, community, and culture in everything that we do. Our employees volunteer their time and collect in-kind donations throughout the year to support our neighborhoods, one volunteer opportunity at a time,” he explained.

Since 2021, Langsam and his team, under the guidance of Operations Manager, Alicia Dietz, have leveraged the company’s success to help elevate others though the DAS Cares Project. He explained that throughout his own career, he’s enjoyed support from many other entrepreneurs who came before him, and that support helped him to achieve more than he ever could have alone, so he made it his personal mission to provide the same kind of support to others.

To achieve this mission, his team has donated over 200 hours of volunteer time, raised nearly $10,000 in direct donations, and collected thousands of dollars worth of clothing, food, and essential items for those struggling throughout the Philadelphia area. This gives these people help in overcoming their challenges and a fresh start at beginning to rebuild their lives.

Some of DAS Cares Project’s Recent contributions include:

• The entire DAS office shut down to color several different art pieces, which were framed and hung on the walls inside different homeless shelters across Philadelphia through the Bethesda Project. These art pieces served as motivational and uplifting messages for those struggling to see the light.
• The DAS team collected over 30 bags of clothing to be donated. The entire Philadelphia office shut down and 18 employees helped Our Closet to organize their clothing donations in their sorting warehouse. Our Closet works to host pop up shops across Philadelphia for the community to shop for clothing and accessories in a dignified way at no charge to them.
• The DAS team raised over $6,000 in donations to donate food to Bethesda Project.
• DAS raised money to help purchase items for 300 emergency hygiene kits for the homeless, refugee, and reentry community of Philadelphia through JEVS Human Services.
• 7 of our employees picked up trash in Philadelphia surrounding one of Bethesda Project’s homeless shelters.
• DAS raised over 200 individual presents for 2 separate families over 2 years through the Adopt a Family program hosted by Volunteers of America during the holiday season

But Langsam says, “It’s not just about the direct impact for the people we help. It’s also about the example we set, which then inspires a movement of people who want to do the same, and inspires the people around them, and the cycle continues. The ripple effect from this is incalculable and grows exponentially.”

This is a notable change in how he approaches charity today compared to previous years.

“In the past, we never publicized our charity efforts, but when I realized our actions were inspiring people around us to step up and help, I began to see the value in publicizing it because that drives more people to get involved. That was a big change for me and my team, and it was uncomfortable at first, but the increased impact made it all worthwhile,” Langsam said.

So now, in addition to the direct support provided by the DAS Cares Project, he’s also working to set an example, and inspire and mobilize a movement of people both inside and outside his organization, who want to help others.

Tina Pagotto, CEO of Bethesda Project, said, “Bethesda Project is proud to have DAS as our partners in ending homelessness in the local community. The team at DAS takes the time to learn what items and support are needed most by the people we serve, including ways to offer motivation and kindness beyond the necessary tangible items and financial support. While making a difference through their team efforts, they are also serving as a role model for other businesses and helping to spread the word about Bethesda Project to their network of customers and peers.”

While DAS has several non-profit organizations it supports regularly, Langsam says they are always on the lookout for additional organizations his team can align with to help even more people.

“We’re looking to double down on our charity efforts this year and maximize the impact we have in the Philadelphia community, both directly, as we’ve been doing, and indirectly, by inspiring others to follow this path,” he explains. He also said the company has a goal to hit a minimum of 600 hours of community service among the team.

Langsam added, “With growing inflation and a weakening economy in the US right now, this is more important than ever, and will provide a critical lifeline to those most in need.”

That’s what true leadership is all about—pursuing your own mission while supporting those around you in need.