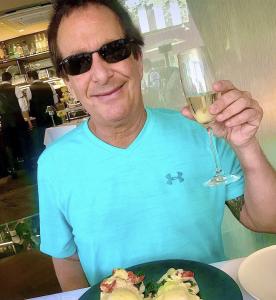 Reach for the stars and have no regrets.”
— Steve Comisar
HOLLYWOOD, CA, USA, January 24, 2023 /EINPresswire.com/ -- President Biden announced February to be National Kindness Month. That’s where everyone that was naughty does something nice. And who better to take a shot at redemption than actor Steve Comisar.

Hollywood is the land of second chances where everybody roots for the underdog to succeed. In the 90’s Comisar sold a solar powered clothes dryer for $49.95 in national magazine ads. It was advertised as a scientifically proven space aged method of drying clothes using only the power of the sun. Customers received a length of clothesline.

Many have argued that it was not a scam because the product did everything it was advertised to do. The authorities didn’t agree and they shut Comisar down. He still kept the nearly 2 million dollars he received from everyone who purchased his solar powered clothes dryer. It also got him his very own Wikipedia page. Not a bad haul for someone not even 30 years old at the time.

But years later it started to bother Comisar so he tried to figure out a way to give back to society for his transgressions. Then it came to him. He contacted Make-A-Wish and asked how he could help. Because February is National Kindness Month and this is the perfect opportunity for Comisar to give back.

After using the prison system as a revolving door for most of his younger years Comisar decided to give up the scams and stick with acting full time. A good choice and a much more rewarding career than scamming people and always having to look over his shoulder. If any Hollywood A-listers came forward and helped Comisar get some acting jobs that would put him back in the spotlight again as a working actor and law abiding citizen. Something everyone wants to see happen.

Starting next month Comisar will be giving away 2 ringside tickets to WWE SmackDown. He will also be giving away 2 second row tickets to The Lion King at the Pantages theater in Hollywood. These valuable tickets will go to a needy family selected by Make-A-Wish. So if you’re looking for Steve Comisar you can find him on the road to redemption. Seems like a good place for him especially during National Kindness Month.

Comisar is focusing his full attention on his acting career. He looks forward to filming the upcoming sequel to Tough Luck, the action - adventure movie he co-starred in with Norman Reedus. Contact Steve Comisar at: stevencomisar@gmail.com