CHICAGO, May 10, 2022 /PRNewswire/ -- This week, the American Lung Association's LUNG FORCE initiative is celebrating Turquoise Takeover to raise awareness about lung cancer, the nation's leading cancer killer. As a part of the important observance, the organization, together with the Ad Council and creative agency Hill Holliday, released A Hope Story, a new public service announcement campaign to raise awareness of lifesaving lung cancer screening. 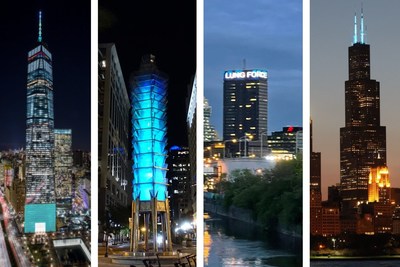 This week, the American Lung Association is celebrating Turquoise Takeover to raise awareness about lung cancer.

LUNG FORCE's annual Turquoise Takeover celebration (May 8-14) unites America to raise critical awareness of lung cancer. Each year, the organization turns the nation turquoise, the signature color of LUNG FORCE, by illuminating buildings and landmarks across the U.S., encouraging the public to wear turquoise and post a selfie on social media, and by telling the stories of those impacted by lung cancer to raise awareness for the disease and save more lives. This year, the Lung Association is also turning social media platforms turquoise with custom squares to promote lung cancer awareness and action. Learn more about this campaign and join the effort at Facebook.com/LUNGFORCE.

"While lung cancer remains the leading cause of cancer deaths among both women and men, there is hope. The five-year survival rate increased by a dramatic 33% in the past ten years. This is thanks, in part, to advancements in research and new treatments for the disease. Lung cancer screening is also a critical tool in our efforts to end lung cancer," said American Lung Association President and CEO Harold Wimmer. "That's why, for this year's Turquoise Takeover celebration, we are focusing our efforts on educating Americans on this lifesaving screening through our impactful new public service announcement, A Hope Story."

Lung cancer screening is key to early diagnosis, and early diagnosis saves lives. Unfortunately, less than 6% of those at high risk have been screened. Together with the Ad Council, the Lung Association released new creative called A Hope Story as a part of their groundbreaking "Saved By The Scan" campaign. Created pro bono by advertising agency Hill Holliday, this new work educates people who smoke and used to smoke about the low-dose CT scan that can detect lung cancer in the early stages, when the disease is more curable. The campaign directs viewers to SavedByTheScan.org to see if they are eligible to get screened. View the PSA here.

"Lung cancer can be overwhelming to think about. However, there's hope for those at high risk to get screened on an annual basis to detect the disease early," said Michelle Hillman, Chief Campaign Development Officer for the Ad Council. "If caught early, a lung cancer diagnosis means getting the medical help you need early on. We're proud to partner with Hill Holliday and the American Lung Association to bring this work to life to inspire high-risk individuals to take the lung cancer screening eligibility quiz or talk to their doctors about getting screened."

Surveys show that the "Saved by the Scan" campaign is making a difference. Prior to when the campaign first launched in 2017, only 26% of those eligible for lung cancer screening talked to their doctor about the scan and 18% of those people had been scanned. As of early this year, 33% of those eligible had talked to their doctor and 27% of those have gotten scanned. In addition, more than 750,000 Americans have taken the "Saved By The Scan" screening eligibility quiz to learn if they could be at high risk for the disease.

"We are incredibly proud of our longstanding partnership with the American Lung Association and the Ad Council on the 'Saved By The Scan' campaign," said Karen Kaplan, Chair and CEO, Hill Holliday. "This work has literally saved lives, and I can't imagine a better use of Hill Holliday's creative and strategic expertise."

During Turquoise Takeover, Americans can join a local or virtual LUNG FORCE Walk to show support for those living with lung cancer. Learn other ways to get involved with Turquoise Takeover at LUNGFORCE.org/TurquoiseTakeover.

For media interested in scheduling an interview with a lung cancer expert, contact Jill Dale at 312-940-7001 or Media@Lung.org.

About LUNG FORCE
The American Lung Association's LUNG FORCE initiative unites women, men and caregivers across the country to stand together against lung cancer, the leading cancer killer. Increased awareness about lung cancer, more education on lifesaving screening and more research funding are critical to fuel lifesaving breakthroughs. Through education, advocacy and research, LUNG FORCE works to provide hope to all those impacted by the disease and save more lives. Find out more at LUNGFORCE.org.

About Hill Holliday
Hill Holliday is proud to be one of the top creative marketing agencies in the country, with over 600 employees across our network. Since 1968, Hill Holliday has built its business on winning the daily share battle for clients in the noisiest and most competitive categories. Blending communications planning, media, and technology with superior creative, the agency delivers game-changing ideas for industry leaders like BMW Motorrad, Frontier Communications, Valvoline, Johnson & Johnson, Novartis, Regeneron, and Intra-Cellular Therapies. For more about Hill Holliday's people, work, and culture, visit http://www.hhcc.com.